Our Liquid Screeds Have Many Benefits Compared To Sand And Cement

Laying a screed on to a floor is the simple process of adding an additional layer of sand and cement or a gypsum-based screed on to a concrete floor in order to provide a sturdy and hard-wearing sub-floor on which the final flooring will be laid. Alternatively, it may be what is known as a wearing screed and become the final floor surface itself.

This all sounds like a fairly simple process, but there is a lot more to it than that. To begin with, is the screed to be bonded to the substrate or unbonded? Perhaps it is going to be laid on top of a layer of thermal or acoustic insulation, in which case it is known as a floating screed. Maybe the floor is going to incorporate underfloor heating. How deep should it be? All of these things are important and will determine the quality, finish, and longevity of the final floor surface. 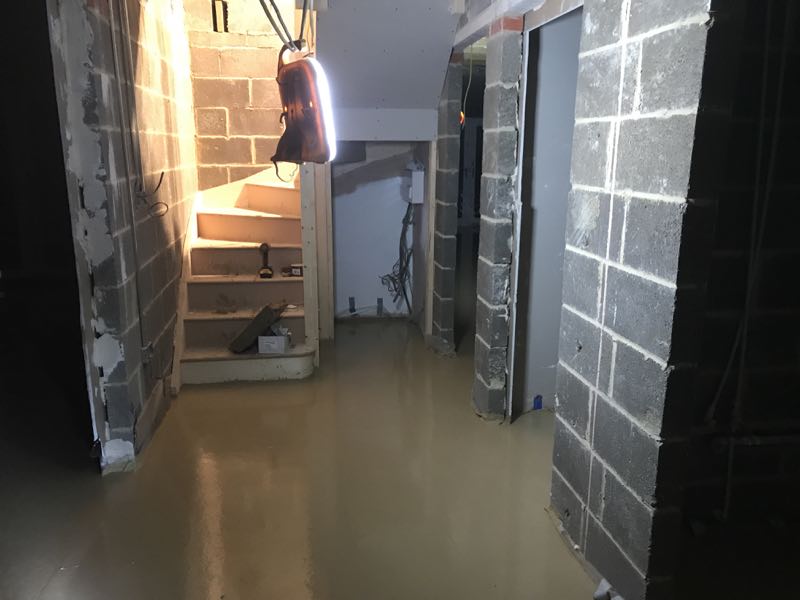 The first thing to consider is the composition of the screed itself. Traditionally, screed has been composed of a cement and sand mixture, sometimes with other additives, which was mixed on-site in a cement mixer and laid on the substrate by a man with a trowel. Today, this mixture is often mixed at a factory and delivered to site, which will give a much better consistency than hand mixing on site. It is still laid on with a trowel. This can be a lengthy process. In addition, the screed has to dry for a considerable time until it can have the final flooring laid. The drying time will depend on the temperature and humidity but is typically quoted as 1mm per day up to 40mm thick and 1/2mm per day thereafter. So a screed of 60mm would take 80 days, or somewhere approaching 11 weeks before the floor can be laid.

Today, we not only have the traditional sand and cement screeds, but also the liquid screeds that we supply and install at UK Screeds. These are delivered to site ready mixed and we install them using a pump and a hose. This makes for really fast screed laying – we can lay as much as 2,000 square metres in a day, which is up to 20 times faster than a sand and cement screed can be laid. Furthermore, our liquid screeds will be ready to walk on in as little as 24 hours, and certainly 48 hours.

In addition, liquid screeds can be laid thinner than sand and cement. When considering the screed thickness in Reading, or anywhere for that matter, it depends on a number of factors. For example, if it is going to be laid over underfloor heating or a layer of insulation, it will need to be thicker than if it is being laid directly on the substrate.

Our liquid screeds have other advantages over sand and cement in that they resist curling and shrinkage. Because they can be laid thinner than sand and cement, they also save weight. While the final flooring cannot be laid until the screed has cured, it can be force-dried after 7 days, bringing down the complete drying time to as little as 28 days. Our liquid screeds are also perfect for use in conjunction with underfloor heating for two reasons. The first is that being liquid, they completely envelop the actual heating pipes leaving no gaps, with the result that the heat in the room is perfectly even throughout. The actual material in the screed – gypsum – is a far better conductor of heat than sand and cement: it is actually nearly twice as efficient. This means that less energy is required to produce the same amount of heat, so there is an ongoing cost saving on energy bills.

Screeds that we use at UK Screeds are also environmentally friendly as they contain up to 36% recycled material, and the gypsum content means that the amount of CO2 produced is much lower than sand and cement.

The actual material used in our liquid screeds does cost more than sand and cement, but when you take into account the amount of labour saved because of the speed of laying and the fact that the material can be laid much thinner than sand and cement, the overall cost works out at about the same. So there are a lot of reasons why you should consider liquid screeds rather than the traditional variety.